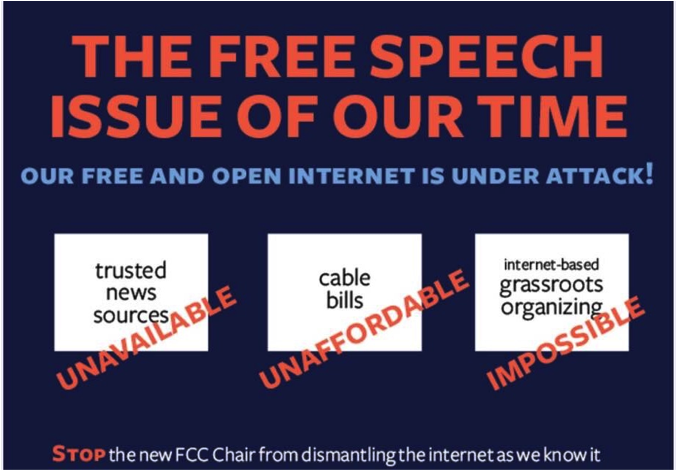 The consequences of Internet monopolization are severe: we would have less choice over content, higher prices, less chance for independent voices to be heard, and less ability to mobilize grassroots movements.

April 20, 2017: Voted to lift restrictions on the amount of airwaves that large broadcasters can purchase and thus monopolize. They also voted to allow broadband rate hikes for schools, libraries, hospitals, and small businesses.

The time to act is NOW:
File a Comment with the FCC

Up to July 17, 2017, The FCC is currently accepting comments on this proposed regulation change.

I do not agree with any proposed changes to the regulation of the internet. The internet should continue to be regulated under Title II to ensure fair and equal access to broadband use by all ISPs and to stop any paid prioritization. The FCC is mandated to serve American citizens, not corporations, and we have a right to keep access to airwaves and broadband protected from monopolization.

I agree with Commissioners Clyburn and McSweeney and believe this policy change would give unfair advantage and profit to the largest of companies and eliminate viable access to all others. We cannot allow content and privacy to be controlled by corporate gatekeepers. A change in Title II regulations and/or rules that ban blocking or throttling websites threatens our constitutional rights to free speech. I submit that regulations remain as they are. Thank you.

Spread the word and contact your Member of Congress and Senators to tell them not to allow any changes to the internet regulations!

Visit and sign up for updates from battleforthenet.com, which is a hub of many organizations advocating for free press and an open net. #protectnetneutralitycalltoaction

Things to know about the proposed regulation changes, NPRM Docket 17-108

Visit and sign up for updates from battleforthenet.com, which is a hub of many organizations advocating for free press and an open net.