END_OF_DOCUMENT_TOKEN_TO_BE_REPLACED

At the July 17th Ulster County Legislature Regular Session, 59 speakers signed up for the public comment period. Many of them were there to address Resolution 285: A Local Law Adopting An Administrative Code To Create Term Limits.

But whether or not there should be term limits for county legislators wasn’t the main issue for many who showed up to speak. What they were primarily concerned with was that Reclaim NY was behind a well-funded push for passage of the law. They spoke about Reclaim’s association with Robert Mercer and Steve Bannon, about dark money, hidden agendas, outside influences trying to hijack our local democracy.

Reclaim NY claims to be non-partisan, yet their mailings urging support for passage of the term limit legislation were only sent to registered Republicans. Reclaim also purchased full-page ads in local papers and many social media ads in support of the legislation.

Resolution 285 calls for limiting county legislators, the county executive and county comptroller to 12 years of service, but the 12-year clock would not start until after the local law is adopted, so all current officials would be able to serve another 12 years should the legislation become law.

The UCL voted to postpone the vote until the Sept 20th Legislative Session, thereby eliminating the possibility of the resolution getting on the ballot this election cycle.

Ulster People for Justice and Democracy does not have a formal stance on the matter of term limits, but if you would like to address the legislature about this law, or the decision to postpone the vote, or the intervention of Reclaim N.Y. in our local politics, plan to show up for the September 20th regular meeting of the UCL (Ulster County Office Bldg, 244 Fair St. in Kingston (6th fl) at 7PM and sign up to speak. Or just come to show your support for the process. And you can always contact your county legislator and express your views.

Find your legislator at http://ulstercountyny.gov/legislature/legislative-members.

One of the proposed laws that currently being considered by the Ulster County Legislature is Proposed Local Law Number 10 Of 2018, A Local Law Promoting The Use Of Reusable Bags And Regulating The Use Of Plastic Carryout Bags And Recyclable Paper Carryout Bags, otherwise known as the “Bring Your Own Bag Act.” This Local Law is the culmination of a decade of discussion in the Legislature. It would ban the use of all single-use plastic bags and require stores to charge 5-cents for recyclable paper bags provided to customers. Restaurants located outside of grocery stores, supermarkets, convenience stores or foodmarts would be exempt. Legislator Tracey Bartels (D-Gardiner) sponsored the law, and Dave Donaldson (D-Kingston) co-sponsored.

At a public hearing in June, 19 community members spoke in favor of passage, and three opposed.

On July 16, the Laws and Rules Committee had voted to block the legislation from moving forward to a vote by the full legislature. The vote was Donaldson, Heppner and Joe Maloney voting to move the forward; Roberts and Haynes against. Chairman Ronk, who has the right to sit in on any committee and vote (which he does whenever he thinks his vote will be needed) cast the deciding vote against. A majority is required for a resolution to pass.

Bartels and Donaldson were able to force the bill onto the Legislature’s August agenda by executing a “petition to discharge,” a procedural move that allows a legislator to bring a measure that has been blocked in committee to the floor of the full legislature by gathering the signatures of eight legislators on a petition. This move does not guarantee a final vote for or against passage— only consideration by the full body. In fact, that is what happened. Bartels, the bill’s sponsor, asked that it be referred back to the Energy and Environment Committee for further work. Look for it on the September meeting agenda.

According to the EPA, between 500 billion and one trillion plastic bags worldwide are used each year, with less than 5% of those recycled. They end up on our streets, clog our waterways and sewers, and the chemicals they are made with leach into our water and our food, ending up in our breast milk, semen, saliva and urine. Environmental groups estimate that tens of thousands of animals, including whales, birds, seals and turtles, die every year as a result of mistaking plastic bags for food.

Other people in other places have learned to manage without single-use plastic bags, including five other municipalities in N.Y., the city of Chicago, the states of California and Hawaii, and numerous countries around the world.

Please, for the sake of all of us in Ulster County, in New York State, in the country, the world and on the planet, take a stand on this bill.

Check the agenda for the September meeting of the UCL, or check back here, for an update on this important legislation. Plan to sign up to speak or just show up and lend your support.

Ulster County stores will be prohibited from using plastic bags and will charge at least 5 cents for each paper bag they provide customers, which they can keep— IF Mike Hein signs it. 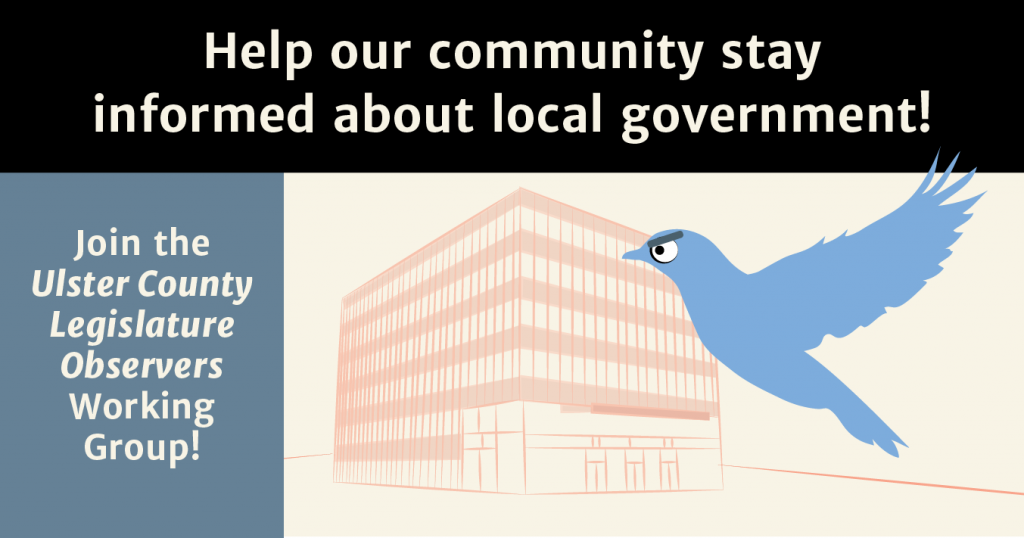 The Ulster County Legislature (UCL) Observers Working Group was formed because, even though so many of the issues that come before the UCL have real consequences for our community, so few of us know very much about who they are, what they do, and when and where they do it. Their meetings are open to the public and, as citizens, we can not only observe, but we can also take part in their discussions and try to influence their decisions.

The reports generated by this group will keep our members educated about legislation that is being discussed and voted on. They can alert our members when issues of particular importance warrant a show of community support–– either for or against a measure. And when all 23 seats are up for grabs next year, they will help us decide which legislators (or hopefuls) to endorse and support. We can only make informed choices if we’ve been paying attention.

If you are interested in attending one of the monthly meetings and filling out a simple report-back form, please contact Elisa (elee2chee@gmail.com) or Tamara (ttelberg@gmail.com) for more info.

Also important are the Republican and Democratic Caucus meetings which take place one hour prior to the Leg Meetings at 6PM in designated meetings rooms in the same building.