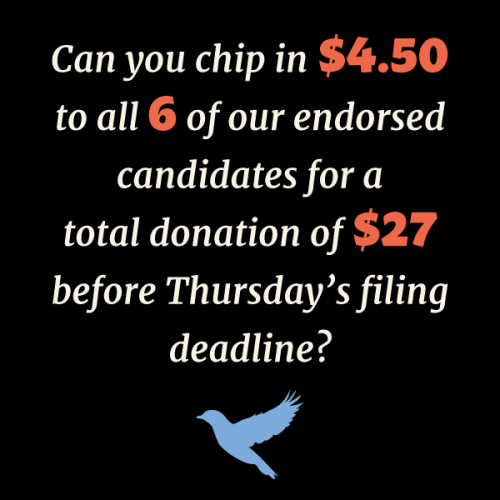 This Thursday at midnight is a big fundraising deadline for 2018 political campaigns. Can you chip in to help support our endorsed candidates?

These filing deadlines are important not just because they show how much the candidates have raised, but also how many different individuals donate towards the total! Even a small donation matters, because many individual donors shows the grassroots strength of a campaign.

While what you donate is up to you, we would like to suggest a donation of $4.50 to each of our 6 endorsed candidates. This adds up to $27, the average donation of the Bernie Sanders campaign. And as it is an unusual donation amount, lots of $4.50 donations will show the power of Ulster People members when we band together.

Of course, if you are able to donate more, please do so! None of our candidates accept corporate money, which means they rely on our financial support to print their literature, pay postage, and cover all the other unavoidable expenses of a grassroots campaign.

About Our Endorsed Candidates

Cynthia Nixon, though best-known as an award-winning actor, is a long-time activist for public schools, marriage equality, and women’s rights. She advances an agenda for a New York that serves the many, not the few: rent justice, marijuana legalization, improved public transportation, a clean energy economy, and drivers licenses for all. She has great clarity about the specifics of Albany cronyism and the inhumane consequences of austerity. She is refreshingly honest about the areas in which she lacks experience and surrounds herself with good, experienced people while leveraging her celebrity into a formidable force against Cuomo’s $30 million war chest. Just two months into her candidacy, she has deftly used her intelligence, humor, and media connections to promote her platform in ways that have already moved the conversation– and Cuomo – to the left.

Jumaane Williams has been a forceful voice on the NYC Council for affordable housing, anti-gun violence measures, fair policing, equity, and social justice. He authored the legislation that ended Stop and Frisk in NYC, and championed youth employment initiatives. He has a background in community organizing and has prioritized housing initiatives and tenants’ rights. He is also a committed immigrants rights activist. He is running to be “the voice of the people in state government,” with a vision to transform the office of Lieutenant Governor into the role of independent advocate for all New Yorkers.

Juan Figueroa is uniquely qualified to bring real change to the Ulster County Sheriff’s department. His plans include diversifying the department, introducing training to combat racism, treating the opioid epidemic as a public health, rather than a criminal justice, issue, and refusing to cooperate with federal immigration agents targeting our undocumented neighbors. As a Marine Corps veteran with 22 years years of service and 25 years as a NY State Trooper and Investigator, he has extensive experience in law enforcement. As a person of color who has experienced discrimination, he understands the challenges– and importance– of fostering mutual trust and respect between law enforcement and the community. He believes immigrants must be able to contact the Sheriff’s Office without fear, and is fluent in both English and Spanish. Driven by a strong sense of justice and public service, he is committed to serving and protecting all residents of Ulster County and upholding due process and equal protection under the law.

Jen Metzger is a town councilwoman, environmental activist and community advocate. She is deeply knowledgeable about social, environmental, and economic issues. As director of Citizens for Local Power, Jen negotiated the first ever reduction in Central Hudson’s service charge and led the effort to keep the Pilgrim Pipeline from carrying Bakken crude oil through our backyards, an effort that produced a domino effect up and down the Hudson River. As a municipal official, she has pursued a local, sustainable energy economy and improved quality of life for residents without raising the costs. She has done so by being simultaneously respectful, fierce, stubborn, smart, compassionate and effective.

Pat Strong brings a progressive vision to economic, environmental, and creative possibilities for the Hudson Valley. She has been an advocate for fully and fairly funded public schools, common sense gun safety, effective interventions and treatment for those addicted to opiods and programs to disrupt the school to prison pipeline. She is an advocate for renewable and sustainable energy and environmental justice for communities suffering the effects of toxic pollution. Pat will be a strong voice against the antidemocratic forces at work in our body politic.

Joyce St. George promises to be a real representative for a district that has felt largely ignored for too long. Her career in law enforcement in NYC, where she was the first female investigator to serve in the AG’s anti-corruption unit, included rooting out crime within the criminal justice system, working with the US Justice Department to mediate between police and communities of color and training others in crisis and conflict management. She has since worked as a court mediator for Delaware-Otsego Counties, assisted FEMA providing crisis services following Irene and other disastrous storms, spearheaded the movement to evict the Mercer-funded, Bannon-inspired Reclaim NY from Delaware County, and hosted a radio program, “Conflict Revolution,” that brings together people with different perspectives. She advocates for rural communities and family farms, for sustainable energy, economic equity and social justice. And as a Puerto Rican woman, she brings a much needed perspective and voice to Albany politics.