Three important resolutions will come to the floor of the regular Ulster County Legislative Session on Wednesday, March 22 at 7pm. Please attend and/or contact your legislators to encourage them to: 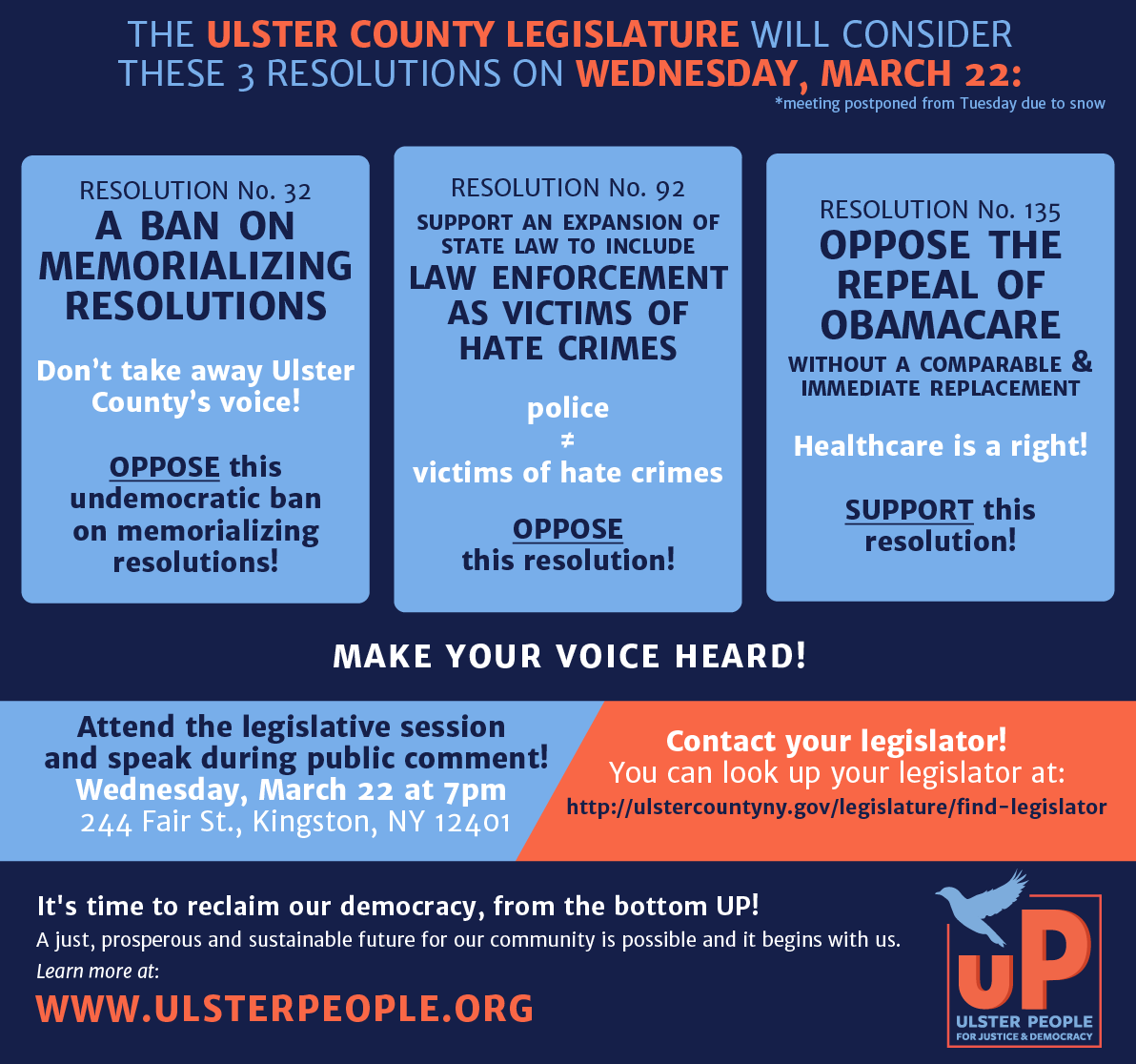 1. A Ban on Memorializing Resolutions

RESOLUTION No.32 – Amending the Rules of Order To Prohibit Memorializing Resolutions [PDF] 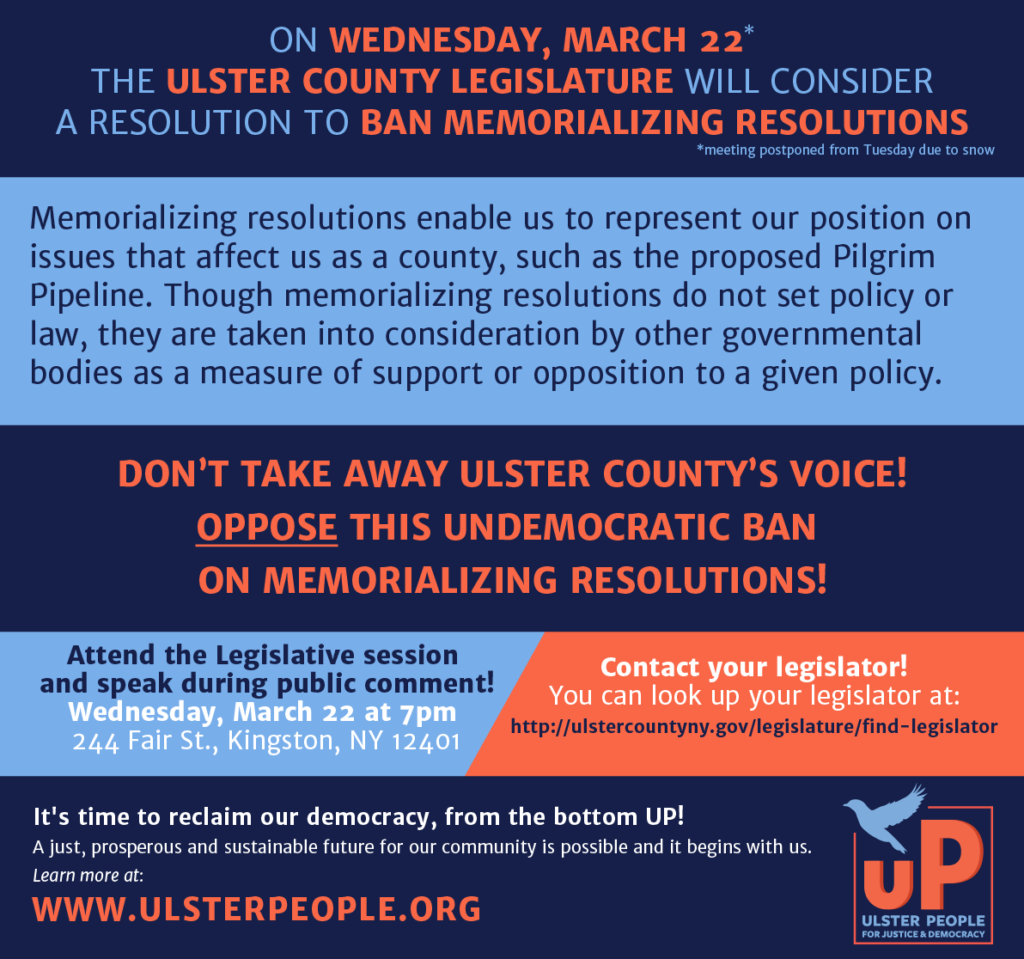 In the past few years, the Ulster County Legislature has passed three unanimous memorializing resolutions opposing the proposed Pilgrim Pipeline and one opposing proposed anchorage sites for crude oil vessels on the Hudson River. These resolutions express the opposition of our community to these potentially hazardous projects.

But now some of the Legislators have claimed that Memorializing Resolutions are “not our business” or “a waste of time.” If you feel that banning memorializing resolutions is undemocratic, please let your voice be heard!

ATTN: This is especially important for residents of the towns of Denning, Hardenburgh, Love, and Shandaken. Democrat legislator John Parete says he supports this Republican-supported ban and could be the swing vote on the matter. please consider calling [(845) 657-8500] or emailing [jparete@msn.com] directly to discuss his point of view and to share yours.

The legislation is anticipated to have its first reading (no action will be taken) on March 22 at 7pm and its second reading and a vote by the legislature on Tuesday, April 18th at 7pm.

For a more in-depth explanation of the process and timeline please visit KingstonCitizens.org.

2. A Resolution to Oppose the Repeal of Obamacare Without a Comparable and Immediate Replacement

RESOLUTION No. 135 – Opposing A Full Repeal Of The Affordable Care Act Without A Comparable And Immediate Replacement Plan That Is Ready For Implementation [PDF]

Healthcare is a right! SUPPORT this resolution! 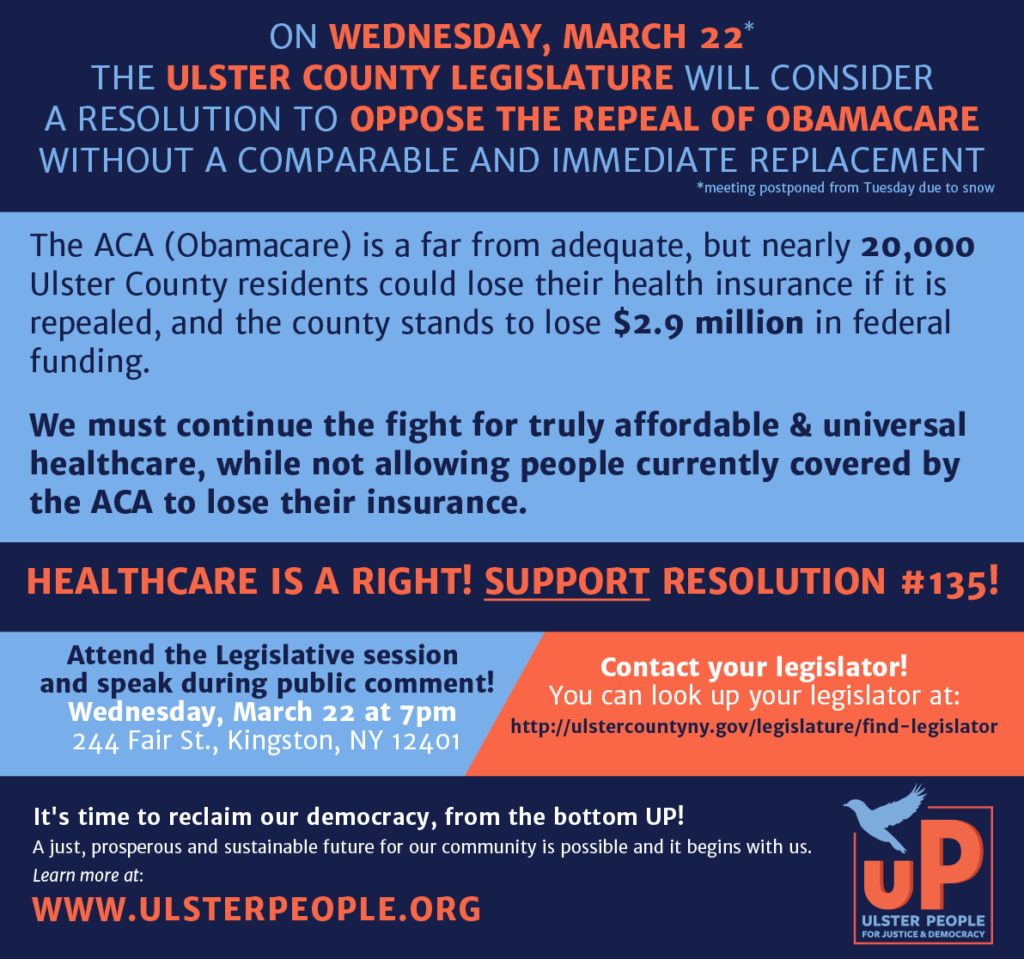 Ulster County lawmakers will consider a new memorializing resolution opposing the repeal of the Affordable Care Act just a month after a similar measure was defeated. As reported by the Daily Freeman, some of the Legislators that opposed the previous resolution have said they intend to support this one.

Nearly 20,000 Ulster County residents could lose their health insurance if the ACA (Obamacare) is repealed, and the county stands to lose $2.9 million in federal funding. While the ACA has problems, it is life-saving for many of those who benefit from it. We cannot allow them to lose their coverage, and we cannot allow Ulster County to lose the funds provided through the ACA for Medicaid expansion.

While we continue to work for truly affordable and universal healthcare, we must make sure that our legislators express their – and our – support for the ACA.

3. A Resolution to Expand State Law to Include Law Enforcement as Victims of Hate Crimes

Our legislators are jumping on the “Blue Lives Matter” bandwagon without looking deeper into what this legislation actually means.

Penal law Sec. 485.00, entitled Hate Crimes, is intended to protect people who are attacked because of their identity, especially if they belong (or are perceived to belong) to a class of people that has traditionally faced bias, discrimination, or prejudice. Specifically, this law is meant to protect individuals from crimes that are:

committed in whole or in substantial part because of belief or perception regarding the race, color, national origin, ancestry, gender, religion, religious practices, age, disability or sexual orientation of a person, regardless of whether the belief or perception is correct.

“Blue Lives Matters” legislation would apply these protections to anyone choosing a career as a Trooper, Deputy Sheriff, police officer, peace officer, or first responder. While assaults on law enforcement officers are tragic and should be condemned, there are already laws in place that mandate stronger penalties for acts of violence against them. Furthermore, research shows that, unlike hate crimes, violence against law enforcement is not on the rise.

A major area of concern with this legislation is the interpretation of what constitutes an act of violence. If this legislation passes, it could result in significantly longer prison sentences for those charged with “resisting arrest.” That charge is already abused by police, especially when dealing with people of color.

Similarly, this legislation could result in a chilling effect on protests. It is not hard to imagine, given today’s political climate, that citizens engaged in our constitutional rights of free expression, protest and public assembly might be characterized as committing “hate crimes” against law enforcement.

Another concern is the huge number of people defined as “peace officers” under NYS Criminal Procedure Law, Article 2.10. Among the 83 listed are Park Rangers, Employees of the Department of Taxation and Finance and even Uniformed Housing Guards.