The event is open to the public, free and handicap accessible (ADA compliant).

The panel will include:

Want to vote for Bernie in the primary? You MUST be a registered Democrat! The deadline to change party affiliation is February 14, 2020.

Sheriff Juan Figueroa will discuss ICE in Ulster County and the steps his department is taking to protect immigrants in our community, as well as other changes he is bringing to the sheriff’s department. He will also answer questions from constituents.

Jen Drake of the Dyson Foundation will be speaking about several important issues facing NYS and the upcoming Census. From the loss of federal money and representation to the citizenship question, which most experts will agree will cause a lower response rate, and how frontline organizations like UP can help provide a full and fair Census 2020 count.

This meeting continues our new format where we explore an issue at both the county level and the state or national level. In doing so, we hope to connect our local 2019 races to the Bernie campaign and beyond.

We will also hear updates from our working groups, and discuss our plans for voter registration, Bernie canvassing, and supporting our endorsed local candidates.

Rosendale, NY – By a huge majority, the members of Ulster People for Justice and Democracy voted on Monday night to endorse Bernie Sanders for President.

Ulster People member Todd Wolgamuth explained, “Bernie Sanders has been a powerful and often lone voice for justice, fairness and equality in a sea of political actors self-centered and corrupted by money with hidden agendas.”

Wolgamuth’s enthusiasm for Sanders exemplifies the strong thread of
political activism that runs through Ulster People, which was founded in the
aftermath of the Sanders presidential bid in 2016.

In the last three years, UP has thrown its volunteer power into several local
political races; with their powerful grassroots connections and multi-pronged approach, UP volunteers were a key contributor to the election of a wave of Democrats to the Ulster County Legislature in 2017.

Now members of Ulster People are eager to focus their energy on a presidential campaign again. “Bernie’s platform aligns with my values and his candidacy promises much needed excitement and optimism,” Penny Coleman, UP member and Vice Chair explained.

With this endorsement of Bernie Sanders, Ulster People positions itself as the organization providing local support and local structure to the Sanders campaign. UP members are seasoned grassroots activists familiar with the turf that needs to be covered for Sanders to succeed. Bernie Sanders won 63% of the vote in Ulster County in the 2016 Presidential Primary; with the added energy of people joining now, UP plans to do that well or better in 2020.

For those interested in volunteering for the Sanders campaign locally, Ulster People for Justice and Democracy can be found at https://ulsterpeople.org.

In the words of UP member Max Grieshaber, “Bernie Sanders represents the substance of valuing community over corporate selfishness.”

The combination of Ulster People’s experienced volunteers and the activists who join now will make a formidable force here in the Hudson Valley. 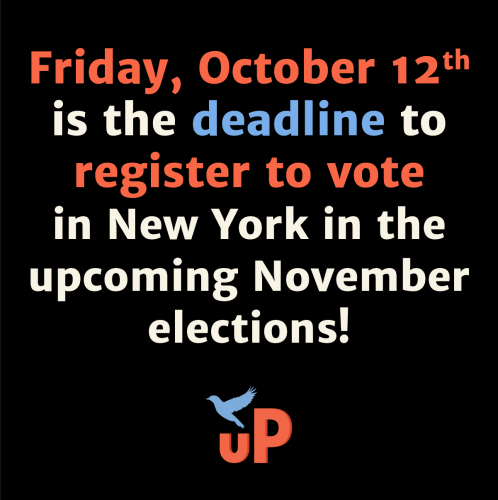 Friday, October 12th is the LAST day to register to vote in New York in the upcoming November elections! Not only that, is is also the LAST DAY to change your party affiliation in advance of the 2019 primary elections — a whole year away!

Not registered? No problem.

Even if you’re already registered, PLEASE take a moment right now to double-check. Especially if you’ve moved recently. But even if you haven’t. New York State is notorious for purging voters from the rolls. We need to be vigilant!

This month we’ll be joined by Joyce St. George, Democratic candidate for New York State Senate District 51 and retired corruption investigator. St. George will discuss her research on Reclaim NY, a right-wing campaign funded by the Mercer Family (and initially directed by Steve Bannon) to strain and disrupt our local governments and school districts.

Reclaim NY has recently become active in Ulster County, making it all the more urgent to we understand their mission and tactics. So please invite your friends and neighbors to join us on Monday!

Also on the agenda:

Please join Ulster People for Justice & Democracy at our August general meeting! This month we’ll be joined by economist Pavlina Tcherneva of Bard College to talk about her proposal for a Federal Job Guarantee. Prof. Tcherneva is a leading scholar of Modern Monetary Theory (MMT) and has advised both Bernie Sanders and Alexandria Ocasio-Cortez.

Also on the agenda:

This meeting is open to the public, but only voting members are eligible to vote on organizational business and will be given priority during discussion of such. Details of our membership policy can be found here. If you support our platform and would like to become a voting member, this meeting will be a great way to learn about opportunities to meet the volunteer requirement for voting membership.

Cynthia Nixon, though best-known as an award-winning actor, is a long-time activist for public schools, marriage equality, and women’s rights. She advances an agenda for a New York that serves the many, not the few: rent justice, marijuana legalization, improved public transportation, a clean energy economy, and drivers licenses for all. She has great clarity about the specifics of Albany cronyism and the inhumane consequences of austerity. She is refreshingly honest about the areas in which she lacks experience and surrounds herself with good, experienced people while leveraging her celebrity into a formidable force against Cuomo’s $30 million war chest. Just two months into her candidacy, she has deftly used her intelligence, humor, and media connections to promote her platform in ways that have already moved the conversation– and Cuomo – to the left.

Jumaane Williams has been a forceful voice on the NYC Council for affordable housing, anti-gun violence measures, fair policing, equity, and social justice. He authored the legislation that ended Stop and Frisk in NYC, and championed youth employment initiatives. He has a background in community organizing and has prioritized housing initiatives and tenants’ rights. He is also a committed immigrants rights activist. He is running to be “the voice of the people in state government,” with a vision to transform the office of Lieutenant Governor into the role of independent advocate for all New Yorkers.

Juan Figueroa is uniquely qualified to bring real change to the Ulster County Sheriff’s department. His plans include diversifying the department, introducing training to combat racism, treating the opioid epidemic as a public health, rather than a criminal justice, issue, and refusing to cooperate with federal immigration agents targeting our undocumented neighbors. As a Marine Corps veteran with 22 years years of service and 25 years as a NY State Trooper and Investigator, he has extensive experience in law enforcement. As a person of color who has experienced discrimination, he understands the challenges– and importance– of fostering mutual trust and respect between law enforcement and the community. He believes immigrants must be able to contact the Sheriff’s Office without fear, and is fluent in both English and Spanish. Driven by a strong sense of justice and public service, he is committed to serving and protecting all residents of Ulster County and upholding due process and equal protection under the law.

Jen Metzger is a town councilwoman, environmental activist and community advocate. She is deeply knowledgeable about social, environmental, and economic issues. As director of Citizens for Local Power, Jen negotiated the first ever reduction in Central Hudson’s service charge and led the effort to keep the Pilgrim Pipeline from carrying Bakken crude oil through our backyards, an effort that produced a domino effect up and down the Hudson River. As a municipal official, she has pursued a local, sustainable energy economy and improved quality of life for residents without raising the costs. She has done so by being simultaneously respectful, fierce, stubborn, smart, compassionate and effective.

Pat Strong brings a progressive vision to economic, environmental, and creative possibilities for the Hudson Valley. She has been an advocate for fully and fairly funded public schools, common sense gun safety, effective interventions and treatment for those addicted to opiods and programs to disrupt the school to prison pipeline. She is an advocate for renewable and sustainable energy and environmental justice for communities suffering the effects of toxic pollution. Pat will be a strong voice against the antidemocratic forces at work in our body politic.

Joyce St. George promises to be a real representative for a district that has felt largely ignored for too long. Her career in law enforcement in NYC, where she was the first female investigator to serve in the AG’s anti-corruption unit, included rooting out crime within the criminal justice system, working with the US Justice Department to mediate between police and communities of color and training others in crisis and conflict management. She has since worked as a court mediator for Delaware-Otsego Counties, assisted FEMA providing crisis services following Irene and other disastrous storms, spearheaded the movement to evict the Mercer-funded, Bannon-inspired Reclaim NY from Delaware County, and hosted a radio program, “Conflict Revolution,” that brings together people with different perspectives. She advocates for rural communities and family farms, for sustainable energy, economic equity and social justice. And as a Puerto Rican woman, she brings a much needed perspective and voice to Albany politics.

Please join us at March for Our Lives Hudson Valley!

We will meet on the Poughkeepsie side of the Walkway Over the Hudson at 11:00am and gather for speakers, followed by a march over the Hudson River.

Thanks to all our supporters. Let the Hudson Valley really show the students of Parkland how much we care!